Goldstein & Pressman, P.C. reduced its July 2014 electric consumption by almost 50 percent, mostly the result of a 21 kilowatt solar array installed in August 2013 on its roof at 10326 Old Olive Street Road. Some of the savings were the result of cooler weather, but the bulk was attributable to the 2,850 kilowatt hours of power the system generated, according to Norman W. Pressman, a member of the firm.
“Most of power was used internally, however some, mainly that which was produced during the midday hours, was sold back to Ameren. During the first ten months of operation, the system has produced over 21,000 kilowatt hours of electricity and prevented more than 15 tons of CO2 being emitted into the atmosphere,” said Pressman. “We’d normally invite people to come over and see the array on our roof, but with the help of our vendor and Creve Coeur city officials who worked us on the installation and approval, it's virtually invisible from the street,” he added. 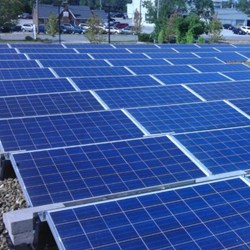