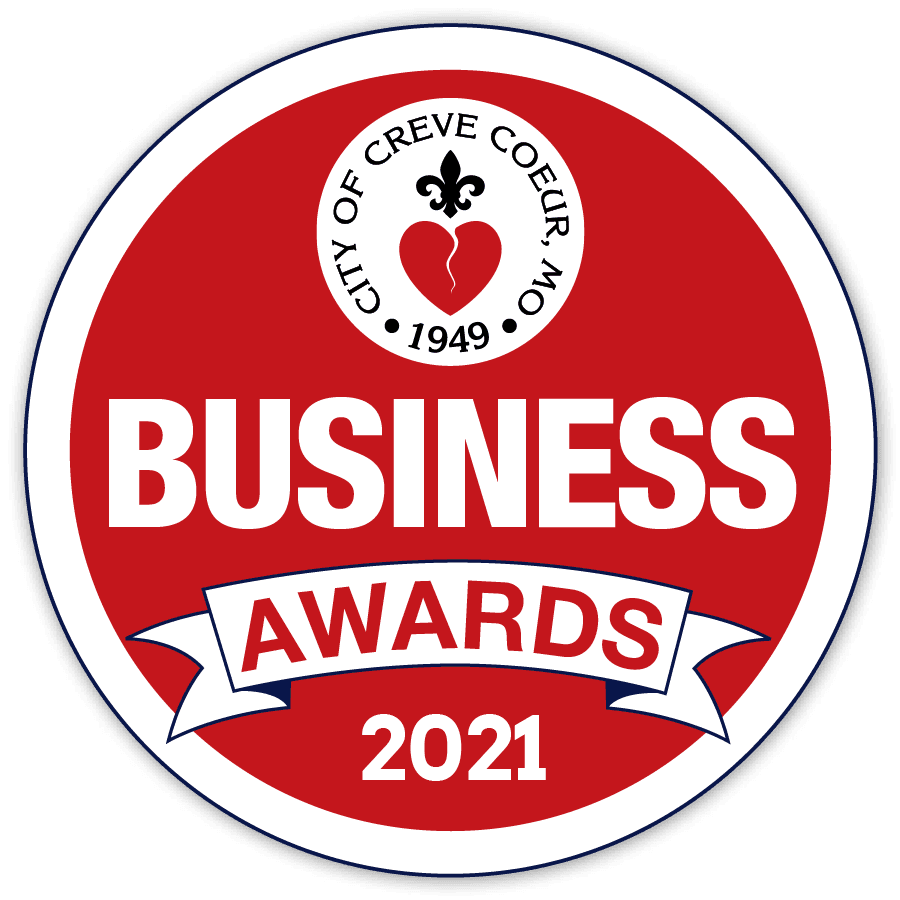 Heart of the Community

- honors a Creve Coeur business or organization that has demonstrated a commitment to the community by making a positive impact in Creve Coeur or the St. Louis region.

- honors a Creve Coeur business or organization that has demonstrated innovation, unique achievements or significant advancements in their field.

- honors a Creve Coeur restaurant nominated by its customers for its outstanding service and food quality.

- honors a Creve Coeur business or organization that has made
sustainability (e.g., energy efficiency, recycling, composting, use of native landscapes, etc.) an integral part of its business practices.

For more information on the Business Awards Program, contact Melissa Orscheln, Public Information Officer and Management Analyst, at morscheln@crevecoeurmo.gov or (314) 442-2081.

Congratulations to the 2021 Business Awards Winners!

HEART OF THE COMMUNITY AWARD 2021Congregation Shaare Emeth (11645 Ladue Rd.)Congregation Shaare Emeth was recognized with this year’s Heart of the Community Award for making a positive impact in Creve Coeur by playing a significant role in telling the story of Dr. Howard Phillip Venable. In 1956, Dr. Venable and his wife, Katie Venable, purchased land in Creve Coeur to build their home, however the City acquired their land by the power of eminent domain and later turned the land into a park. City and court records show that the people leading this effort were motivated by bigotry and racial animus and sought to prevent the Venables from building their home in the City due to their race. When members of Congregation Shaare Emeth discovered the history behind the park, they stepped forward to do what they could to right this wrong for the betterment of the community. This process included the creation of the Venable Park Coalition, attending Ward town halls and City Council meetings, and voicing their concerns at a public forum dedicated to discussing the park’s history. The dedicated and persistent efforts of Congregation Shaare Emeth directly led to a positive change in our community. In December 2019, the Creve Coeur City Council acknowledged this past injustice and renamed the park as Dr. H. Phillip Venable Memorial Park. This fall, the City will host a park rededication ceremony in honor of Dr. Venable and his family. 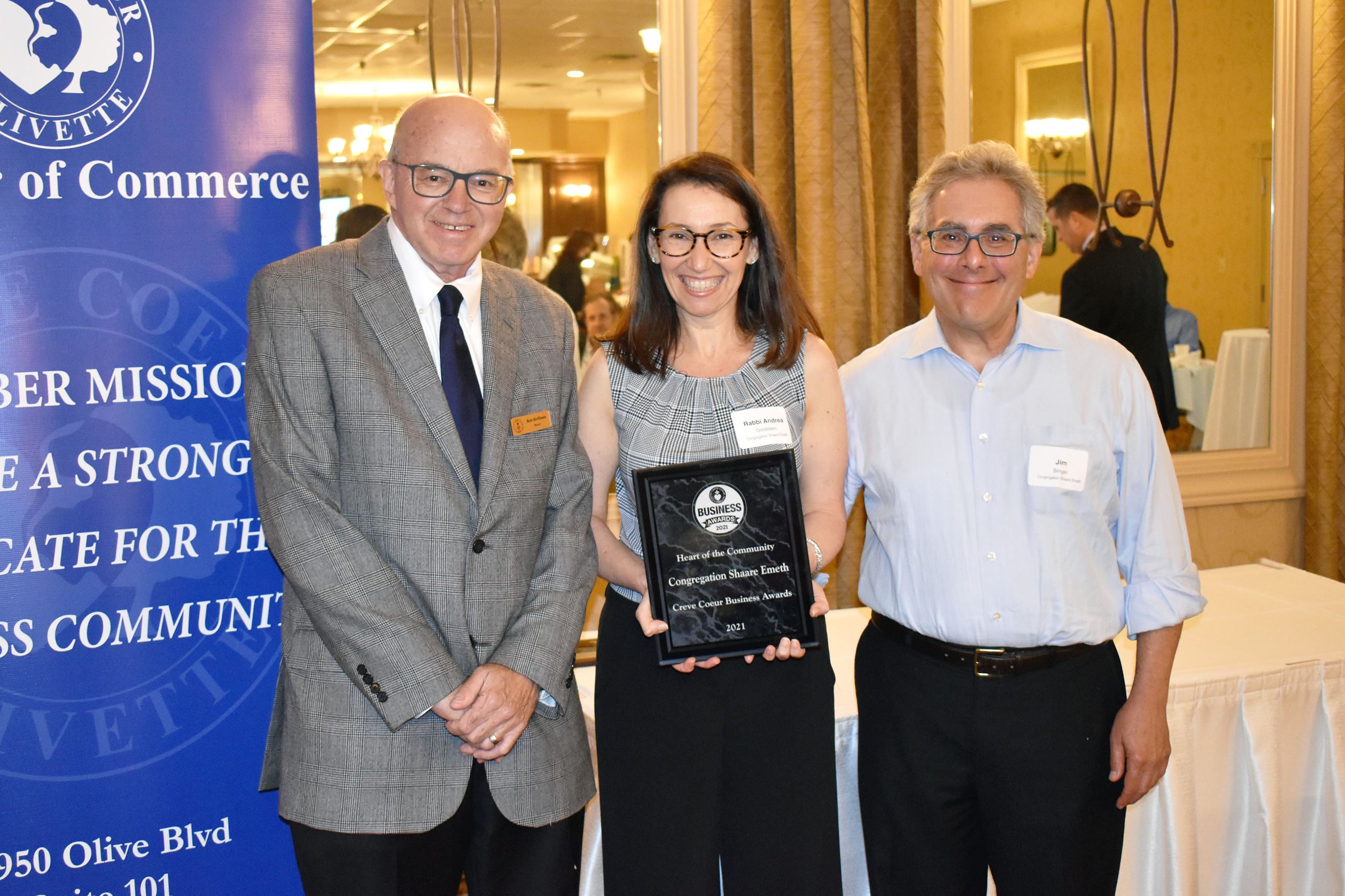 MOST INNOVATIVE BUSINESS AWARD 2021
PAPR FORCE
This year’s award highlights the innovative efforts of two Creve Coeur physicians, Dr. David Katzman and Dr. Jennifer DeLaney, who saw firsthand the risks that healthcare workers were taking during the COVID-19 pandemic. Dr. Katzman and Dr. DeLaney recognized the need for a safe, comfortable and reusable device to protect healthcare workers from exposure to infection, which led to the development of a Powered Air-Purifying Respirator (PAPR) of their own design. The device they created has a loose fitting hood, a fog-free face shield, and an air filter that filters 99.97% of aerosol particulates greater than 0.3 microns. The CDC rates the device to be at least two-and-a-half times better at preventing exposure than an N-95 mask. During the past year, Dr. Katzman and Dr. DeLaney have donated this NIOSH-approved PAPR to hospitals in the United States and to medical providers in developing countries around the world where there is limited access to vaccines. 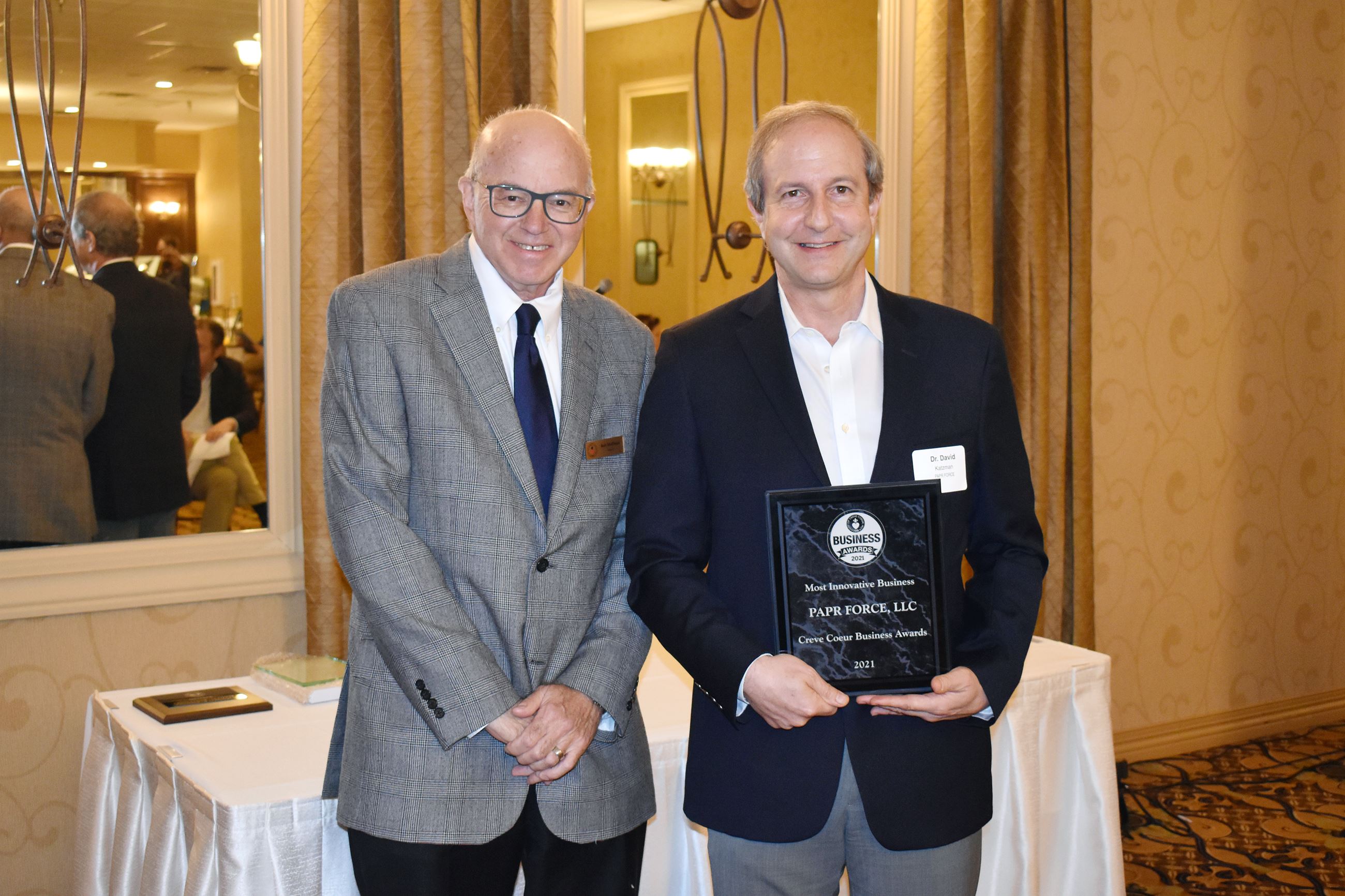 Green Business Award 2021
O’Connor Insurance (12101 Olive Blvd.)
O’Connor Insurance was recognized as the winner of this year’s Green Business Award for making sustainability an integral part of its business practices and taking significant steps to create an environmentally friendly office space. They were the first commercial property in Creve Coeur to install solar panels, and the cost savings from the solar panels have since paid for themselves. This business switched to LED overhead lights several years ago, with automatic lights switches and a programmable thermostat to help conserve energy when the office space is not in use. O’Connor Insurance is also one of only a dozen businesses to have received Green Business Certification from the City of Creve Coeur, a recognition presented to businesses that meet a certain high standard of green business practices. 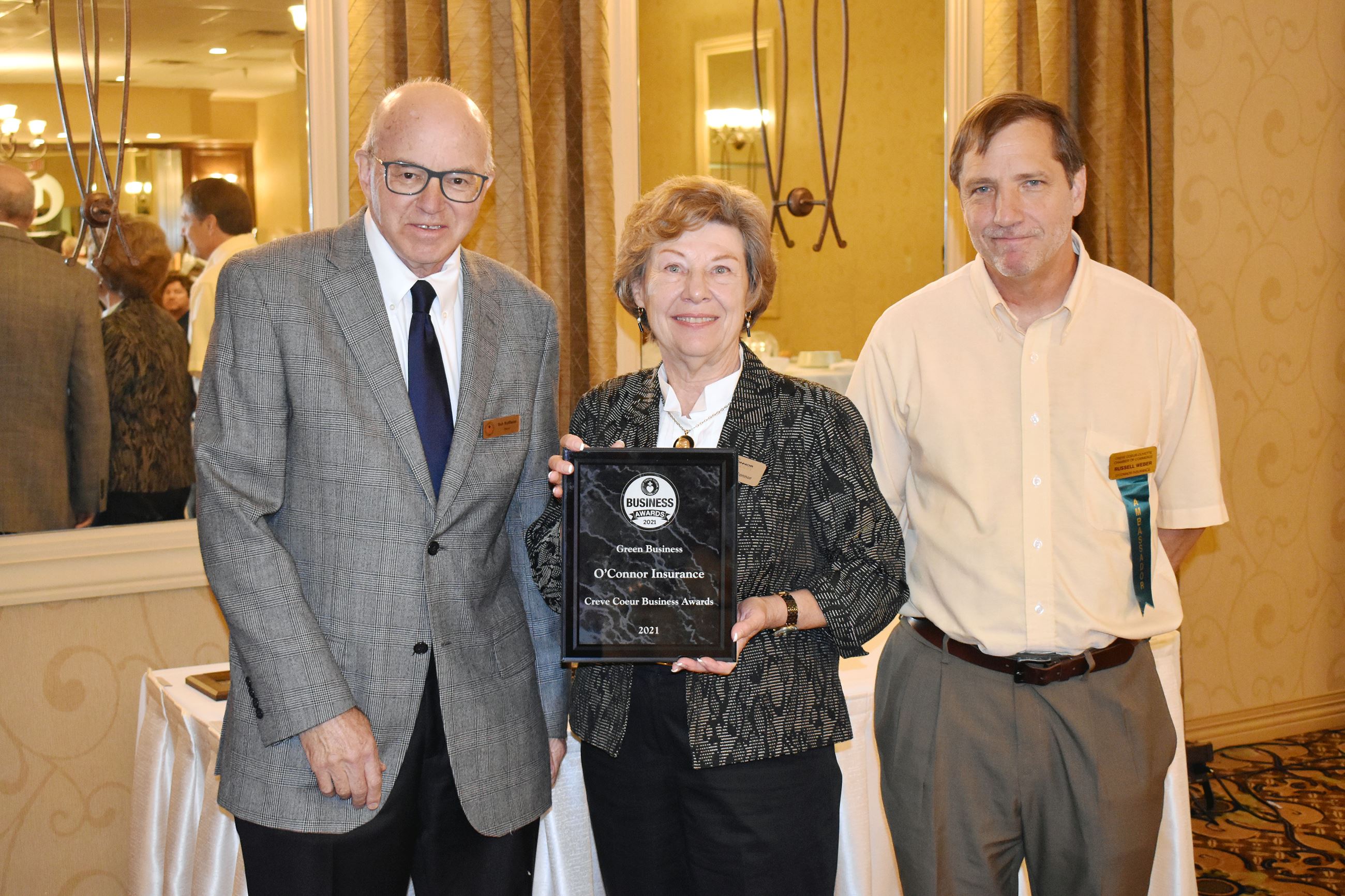 Favorite Restaurant Award 2021
Orzo Mediterranean Grill (11627 Olive Blvd.)
Nominated by its customers and selected by popular vote, Orzo Mediterranean Grill is known for its Mediterranean flavors with seasoned proteins and fresh, locally sourced vegetables. In addition to offering healthy delicious dishes, owners Nick and Laura Cowlen also host community give-back days where a percentage of sales is donated to a nonprofit organization. Orzo Mediterranean Grill first opened its doors early last year, prior to the start of the pandemic. Operating the first year of their restaurant under COVID-19 restrictions has been challenging, but the community has continued to show its support for this new Creve Coeur staple. As both business owners and residents of Creve Coeur, Nick and Laura go above and beyond to make meaningful connections with their customers—who are oftentimes also their neighbors. 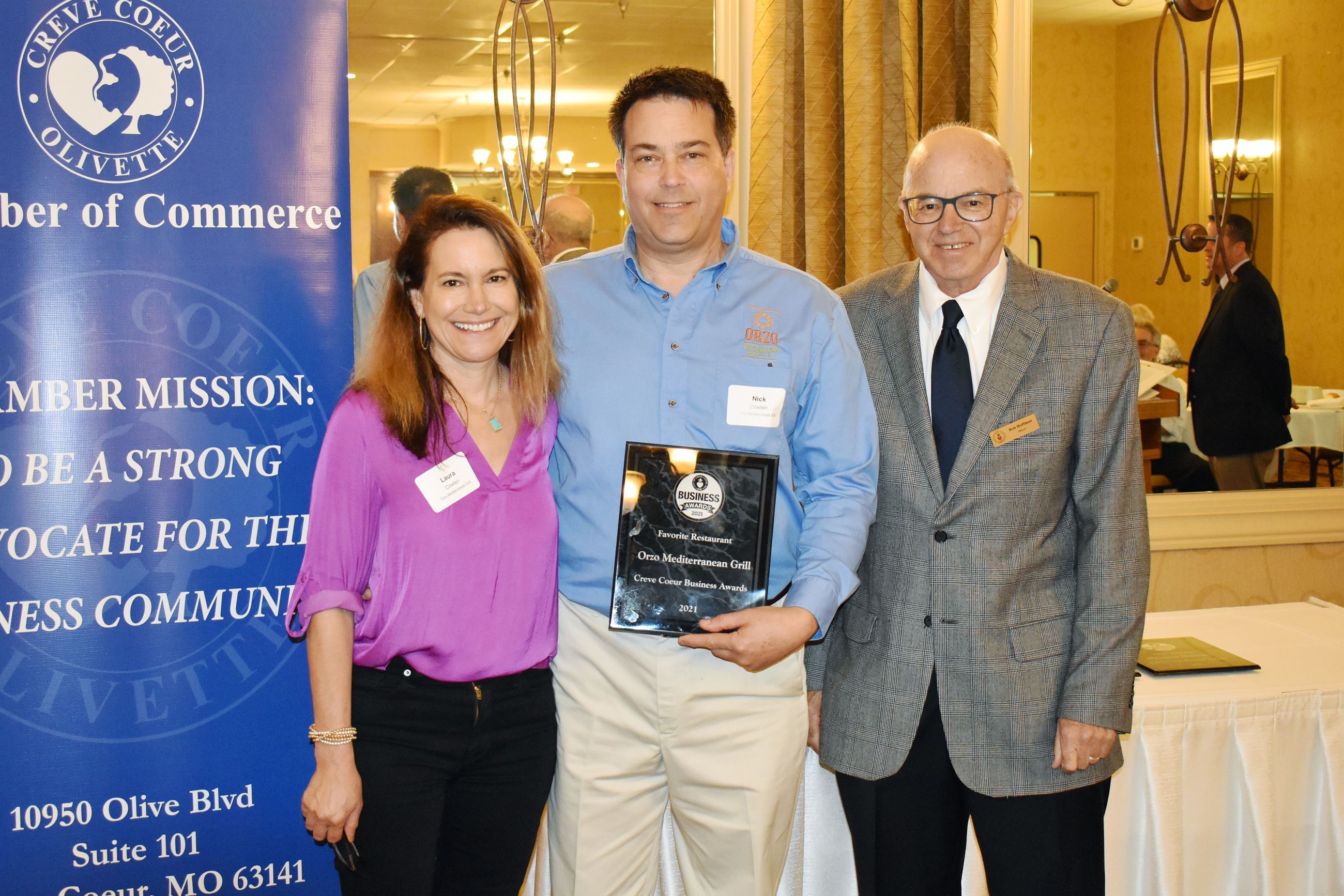